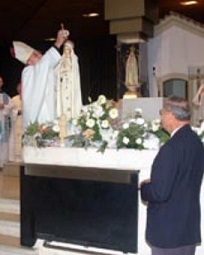 Among the more than half a million people who gathered at Fatima in October of 2007 for the 90th Anniversary of the Miracle of the Sun, was Archbishop Tadeusz Kondruchewicz, the first Catholic bishop consecrated in Russia in the post Communist era. He had been consecrated Archbishop of Moscow in 1991.

Also on pilgrimage to Fatima for the commemorations were two directors of the International Pilgrim Virgin Foundation, Carl Malburg and Thomas McKenna. They were accompanying the #2 Pilgrim Virgin Statue. They were excited and honored to meet the illustrious Archbishop and attend an early morning Mass he celebrated in the Chapel of the Apparitions for a group of Russian pilgrims accompanying him. Archbishop Kondruchewicz was pleased with the presence of the famous International Pilgrim Virgin Statue of Our Lady of Fatima which he recalled had visited his diocese in 1992.

When he learned that the statue was present, he asked that the statue be placed on a pillar in front of the altar which is very near where Our Lady had actually appeared in 1917. During his sermon, Archbishop Kondruchewicz spoke of his absolute faith and trust in Mary’s promise of the conversion of Russia, and of his own devotion to Our Lady of Fatima. At one point the Archbishop choked up with tears as he spoke fervently about Our Lady’s promise for his country. 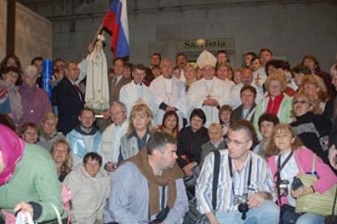 He had been present in October, 1992 when the statue was brought on pilgrimage to Red square in Moscow. That day more than 1,000 people had gathered in front of the Kremlin together with the Archbishop and the Orthodox Patriarch. In the presence of all, Archbishop Kondruchewicz had crowned Our Lady of Fatima and thanked Her publicly for the freedom in Russia.

Now, sixteen years later, he once again found himself in the presence of the same miraculous statue in the very place where Our Lady had actually made that promise. Upon entering the sanctuary, after the statue was in place, he once again crowned Our Blessed Mother in a moving act of piety.

In October, 2007 Archbishop Kondruchewicz was named Archbishop of Minsk by Pope Benedict XVI. He has entrusted this challenging assignment to the Blessed Virgin Mary. Let us keep him and the Catholic Church in Eastern Europe in our prayers.